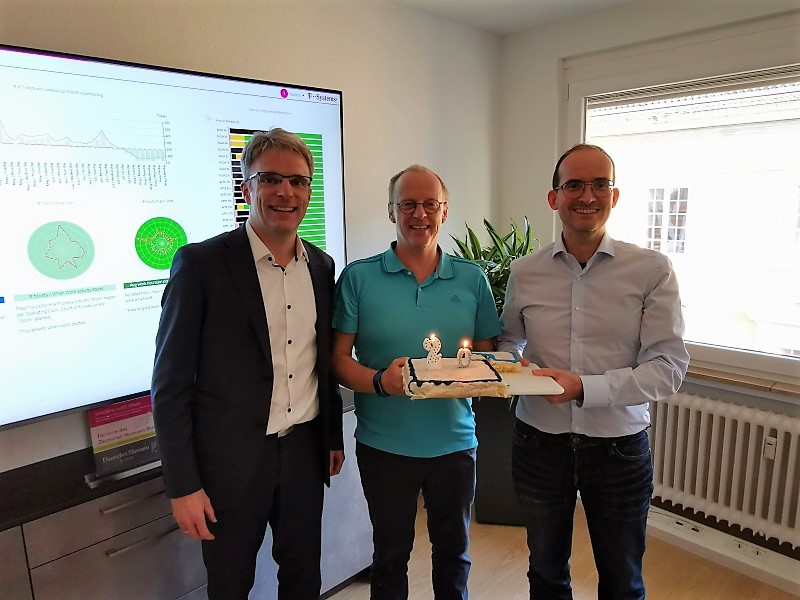 In October 2020, the transfer of the Bonn-based medium-sized company into the hands of the employees was completed with the signature at the notary. The software service provider from Bonn is pleased about this, because this means that the implementation is in time for the current competition round of the medium-sized business competition, which the organizers had extended due to the corona pandemic.

25.03.2021 BusinessCode already kicked off its participation in “Ludwig 2020/21” in February 2020 at the nomination event for “Ludwig 2020“. Both the management buy-out made by BusinessCode and the regional SME competition were supposed to be finished in the summer of last year, which was not possible due to the pandemic situation.

And so, the management buy-out was notarized in October 2020, shortly before BusinessCode’s 21st birthday: Founder Hanno Gehron handed over the company to the responsibility of the employees. This takeover of the medium-sized software company had been planned for some time. “But as it is, sometimes it takes longer than planned from the first talks to implementation. The significant restrictions last year did the rest and made the initiated takeover process slower and more time-consuming than we would have liked,” explains Martin Schulze, old and new CEO, who is now also a shareholder. And so, it is fitting that the “Ludwig 2020/21” competition round has been extended. Here, the new owners are now competing in the “Company Succession” category with their extraordinary succession concept and are eager to see how this will be evaluated by the jury.

Schulze initiated this “internal” company takeover together with nine colleagues. Founder Hanno Gehron had already planned to pass BusinessCode into new hands several years ago, and a sale to other companies was also under discussion. Everyone is very happy with the takeover by long-time employees. “The decision to sell BusinessCode was not easy for me,” says Gehron. “So, when the employees offered to take over the company, I knew immediately that this was the best solution.”

“The idea for this type of management buy-out arose from the culture and cooperation practiced at BusinessCode, which is characterized by great mutual trust,” explains Martin Schulze. The management buy-out was an important step in the company’s development, which also laid the foundation for further entrepreneurial development. At the same time as the sale, the spin-off BlueBox Systems was also notarized. “In addition to our innovative solutions and technologies, we have also further developed the internal organization and cooperation in Corona times,” explains Schulze. “In addition, new exciting projects have been added. So, we will continue to be a strong partner for our global customer base in the years to come.”

To continue the momentum of further development, the company is now increasingly looking for new employees. “The management buyout is a strong signal from the workforce that we still have a lot planned for the company. This includes growth and the integration of new colleagues into the company. That will be the task for us in the coming months,” explains Martin Bernemann, who was appointed as an additional CEO in the course of the company takeover.

And now it’s a case of keeping our fingers crossed and waiting. The team led by Martin Bernemann and Martin Schulze believes it has a good chance of receiving the Ludwig at the awards ceremony on June 22, 2021.