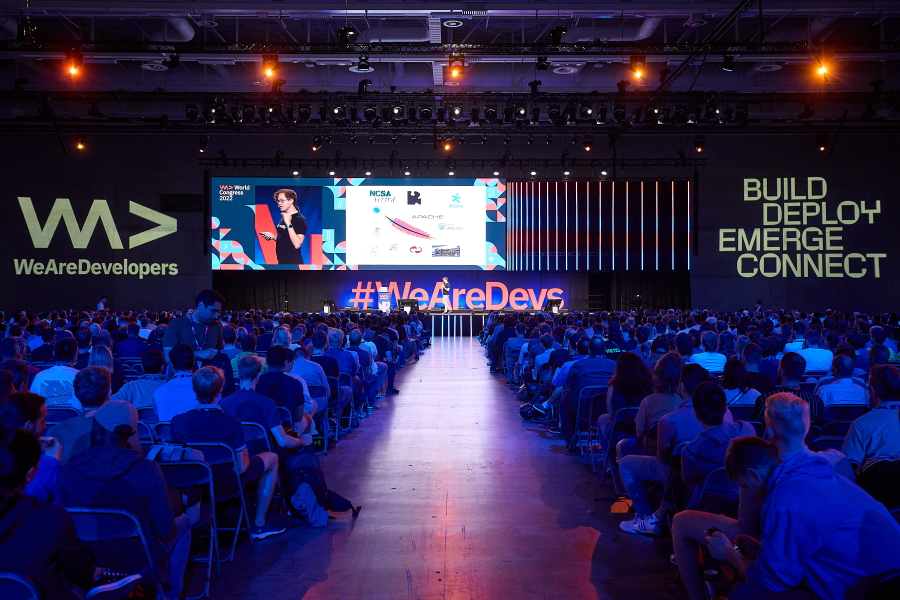 Alexander Goth at the WeAreDevelopers Conference in Berlin

When our two CEOs Martin Bernemann and Martin Schulze got access to free tickets for the WeAreDevelopers conference in Berlin as part of our recruiting campaign and asked the team who wanted to go, I knew I had to go! I am very interested in new developments and like IT projects and ideas that are out of the ordinary. So I decided to go and I got a ticket and went to Berlin in June.

The congress took place in the CityCube Berlin. This is a location over several floors with outdoor catering and recreation facilities in front of and behind the building. My hotel was within walking distance, so I could return there in between. I recognized the other conference participants in the hotel straight away by their company T-shirts – a kind of trademark among fellow informatics professionals.

I watched 5-10 talks per day. Spread over the different floors, there were many small and large presentations. It was difficult to make a selection from the many exciting keynotes. I found the AI presentations very interesting, here I would like to go into more detail on some of them:

One presenter was Thomas Dohmke, CEO of GitHub. He presented the AI bot Copilot, which is supposed to replace the human counterpart in pair programming. This is nonsense, of course, because AI is nowhere near ready to replace humans. Still, it was impressive to see how Copilot could complete source code just by analyzing function names like IsPrime and BubbleSort or comments. Apparently Copilot understands natural languages, which I find quite amazing, but also very helpful.

However, Copilot has already come under criticism. Microsoft uses the source code of open-source projects from GitHub to train the AI bot. Besides the “copyright infringement”, the open source community would certainly have liked it if the AI bot had also been open source, because of course the use of Copilot is not free. By the way, something like this is now also available from Amazon: They call it Codewhisperer.

Since I am also interested in quantum computing, I would like to mention the presentation by Alexandra Waldherr. Besides quantum computing, she gave a talk about the production of quantum dots. She also presented a game from Google where you playfully build a quantum computer to roughly understand how it works. That was very exciting and really interesting, especially for me. I have already given one or two talks on quantum computing for my colleagues at BusinessCode.

There was a fun event with John Romero, one of the two fathers of the first-person shooter genre. The other father is John Carmack, and both are among the founders of the studio id Software. This achieved great fame with games like Wolfenstein 3D, Doom and Quake. During Romero’s talk, people were randomly selected from the audience to compete against him in a deathmatch in Doom 2. Although one has to speak of victims rather than opponents, because no one really had a chance against him.

In conclusion, I can say that the WeAreDevelopers conference was absolutely worth it and I brought some new knowledge back to the office and our projects. Maybe we’ll even go next year in a larger group. In any case, I’ve already got my colleagues excited.